Android vs iOS: Opinions From a Long-Time Android User

I don't really keep up to speed on consumer technology. For me, the enterprise IT space holds more challenge and interest. There is one piece of consumer tech though that has become fully ingrained in my life: the tablet. For that reason, I'm going to summarize my experience in using both Android and Apple based tablets.

For some background, I've been using the LG Optimus Pad running Android 3.0 for the last year or so and an HTC Desire running Android 2.3 for about two years. Prior to that I had an HTC Dream running Android 1.5 and then 1.6. I recently started using a 3rd-gen iPad with WiFi & 4G. My perspective on all this is from a long-time Android user who is stepping into the Apple camp for the first time. I use my tablet for productivity, studying, and some social networking. I'm not a gamer.

My first impression of the Apple App Store is how polished it appears. Every app has multiple screenshots and very detailed descriptions of what it does and what was changed in the latest version of the app. I'm not sure if this is a policy or just a convention adopted by app developers, but it works. In the Google Play store (formerly the Android Market) it can be hit and miss as far as what information the developer shares about their apps. I know I've seen lots of comments from users asking the developer to describe what they've changed in their latest version.

Just a gut feel here, but the App Store also doesn't seem to have as many "junk" apps in it. I suppose this is a direct result of Apple's tight control over what gets published in the store. As a result, my impression while browsing through the store was that I didn't have to be quite as careful about what I installed given the knowledge that Apple had tested and vetted each app. Of course most people are familiar with the Google Play store and their reputation for allowing most anything into their store. This has both pros and cons but in this case, knowing that a second set of eyes was scrutinizing an app before I installed it made the Apple App Store feel a bit safer.

One thing that really surprised me was how different the same app can be between Android and iOS. Evernote is the best example I have. Not only does the app have a different interface, but it functions differently too. Browsing through notebooks on iOS is easy and intuitive and best of all, editing a note works exactly the way you expect it to. Highlighting text and applying formatting changes works without errors as does creating and modifying bulletted lists. I've had difficulty doing all of these things in the Android app and had to compromise by using much less formatting in my notes than I would've liked.

As a result of the quality of apps like Evernote on iOS, I expect my use of these tools and my resulting productivity to rise appreciably.

Ok, the hot-button issue first: software. Android software updates can be very frustrating because of how the ecosystem works. First Google releases a new version into the wild. The hardware manufacturers then have to take it and do their modifications, testing and certification on their various devices. The wireless carriers then get involved (in the case of a mobile phone or a 3G-enabled tablet) and go through their own rounds of testing and certification. Finally after what normally takes many months, it's in the hands of the end user. Case in point, Android 4.0 (Ice Cream Sandwich) was released in October of 2011. Now five months on, devices like my LG Optimus Pad or the Samsung Galaxy Tab 10 still don't have an official upgrade. By contrast, when a new version of iOS is released it doesn't take long at all to get into the hands of the end user. With over-the-air upgrades now possible, the update can be put onto the device from almost anywhere.

On the hardware front, the thing that I noticed most of all with Android devices is the lack of choice when it comes to 3G-enabled tablets. This is partially due to the wireless carriers in my area only carrying a single Android tablet each and partially due to the lack of choice across the market. There are way too few 3G-enabled tablets coming to market in a time when mobile data growth and adoption is through the roof. This blows my mind and is my single biggest sticking point on the whole Android ecosystem. Apple, in my opinion, got it right by giving consumers the choice of 3G from the beginning.

One feature I love in Android is how apps can share directly with one another.

For example, when viewing an article in an RSS reader, the URL can be shared with a second app. This can either cause the app to open so that further work can be done by the user or the app can process the information that has been "shared" with it in the background (for example, that's how the Read It Later app does it when it saves the URL to your reading list without you having to leave the RSS reader). The benefit of this is that once Read It Later is installed and linked with your RIL account, any other app on the device can take advantage of that linkage. Conversely on iOS, the reader itself would need to link with your RIL account. This means that for every app that wants to send something to RIL it has to be configured with your RIL username and password.

One feature I'm finding I really like in iOS is how backgrounded apps stay exactly where you left them for as long as you choose to leave that backgrounded app running. In Android — and I notice this most often with web browsers — the backgrounded app will eventually be terminated. This causes the application state to be lost which means whatever tabs or pages were open are lost. In iOS I can leave that browser open all night and come right back to the exact spot I left it the night before. The list of backgrounded apps on iOS also contains every single app that is running. On Android — at least with 3.0 and 2.3 — that list is limited in size and only shows the very most recently used apps. 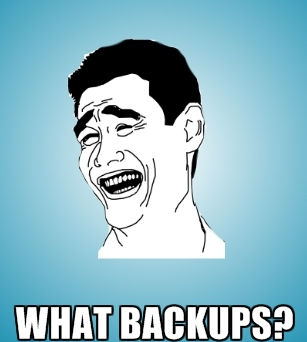 Apple seems to have done a better job in iOS. First there's the backup that iTunes grabs every time the iPad is tethered to my PC. Next, to make things even easier, there's now WiFi syncing with iTunes which means I don't even have to tether to get that backup done. And if that wasn't easy enough there's also an option to backup to iCloud which means a backup can be taken anywhere as long as there's Internet connectivity.

And of course, the flip side to taking a backup is restoration. Again, Apple seems to have gotten this right. The first time the iPad is turned on it asks if this is a new device or if it should attempt to restore a backup from iTunes or iCloud. Apple thought about the restoration right up front. Android? I honestly don't know. And that's problem enough. I never had confidence in the "backup my device" feature because I couldn't find any concrete information about how to do a restore.

Walking out of the big box store, iPad in hand, my bank account was over $800 lighter. The iPad, the smart cover, the extra power adapter and the Zagg screen protector all add up. I don't spend that kind of money lightly and I wondered as I drove off if this was going to be a costly mistake. Well, about an hour after opening the box, I was hooked. This thing is so easy to use. And it hit me: that's exactly what I wanted. I didn't want a "project" gadget that I would have to hack together and figure out workarounds for. I needed a tool that would keep me productive and that would get out of my way while working on it. The iPad is it.

My Android experience has been long and taken me through multiple devices. The Google Play store has a lot of great apps but I've found that even best of breed ones like Evernote are buggy and not totally polished. This lead to me finding workarounds and making compromises which made the tablet obtrusive when using it. Nowhere was this more apparent than when browsing the web. I have four browsers installed on my Android tablet (stock Browser, Dolphin for Pad V1.0 Beta, Opera Mobile and OverSkreen) and none of them are fully functional. Each of them suffers in at least one of these areas: speed, stability, Flash playback, and interface design. Without a doubt though Android does one thing better than Apple's iOS ever will: integrate with Google products. Enter your Google username and password once during device setup and you're hooked into your Gmail, contacts, calendar, RSS feeds, Google+ and so on. Being a big user of Google's apps, this was a killer feature for me and one that I miss on the iPad.

I draw no conclusions here, good, bad or ugly. My intent is not to put one platform ahead of the other, but to give insight into the experience and opinion of a long-time Android user who recently made the plunge into the Apple world. To each their own.