Why I Use MediaWiki for Taking Notes

I was prompted to write this when I observed someone the other day who was sitting in the same training as me taking notes in a self-addressed email. No offense to people who do this, but W. T. F. How are you going to keep track of that email among the dozens/hundreds you receive every single day?

I take a lot of notes for research, certification study, and training. I use MediaWiki for almost all of these notes. Here's why.

First off, MediaWiki is not a text editor. This may seem strange but after reading this whole article, I hope you'll understand why that doesn't matter and in fact, why that makes it more powerful. As the name implies, MediaWiki is actually software for running a wiki. In fact, it's the same software that runs the most famous wiki, Wikipedia.

MediaWiki runs on UNIX (including OS X) and Windows machines. It's written in PHP and runs under almost any web server (Apache, lighttpd, nginx, IIS). By its very nature, it's web-based, which plays nicely into one of the reasons I like using it so much.

When I'm taking study notes or sitting in a class, I want to pound out my notes as quickly as possible. Especially in a classroom as the longer it takes to tap out a note the more I'm likely to miss as the instructor continues on. When I'm studying, I want to be able to write quickly and without a clunky editor getting in my way. The point of study is to allocate brain power to the content I'm studying, not to running the editor.

MediaWiki uses a markup language that is very simple and requires minimal keystrokes yet delivers very rich formatting once the page is rendered back.

One thing I really like about MediaWiki's markup is that I don't have to break a finger while trying to contort my fingers to hit awkward keystrokes on the keyboard (ever written a long document by hand in HTML?). The MediaWiki markup characters are no extra work from everyday typing. For example, a bulleted list would be typed like this:

The leading "*" characters are markup for "make this line part of a bulleted list". Easy.

Not only is the markup easy to type, but the markup characters make sense and are reasonably intuitive.

So what's the point of all this markup anyways? Well, so that notes can have rich formatting! Without the markup, it wouldn't be possible to create lists or headings or bold text and so on. And without nice formatting, notes would just be plain text. And that sucks. Without these elements, it takes more brain power to recognize and interpret the content within the note. A richly formatted note is far easier to read and review after the fact. And so far I've only talked about text. You can of course embed pictures, videos, and audio into MediaWiki pages as well.

To see what I mean, here's what the markup above renders to: 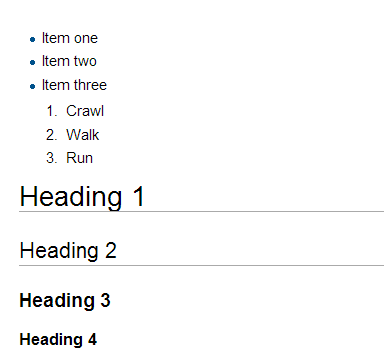 Without even realizing it, I've become a big user of Software as a Service (SaaS). No doubt this is driven by my ownership of an iPad and the near ubiquity of 3G/WiFi connectivity. I'm connected everywhere and all the time and I expect my most important applications to be available to me on the same schedule. And most importantly I expect the data within those apps to be in sync and up-to-date no matter which device I'm running the app on.

MediaWiki is perfect for addressing this need. MediaWiki is software for running a website. Websites live on the Internet. The Internet is accessible from... well, pretty much everywhere and on anything these days.

By putting a MediaWiki instance on the Internet, it instantly becomes available from all of my devices. And since each device is accessing the same instance, the data is always instantly in sync between them.

Ironically, I'm writing this on an airplane and have no connectivity. This is the only time I can think of though when I don't have some sort of connectivity.

Second benefit to being web-based: all that's required to read/write notes is a web browser, one of the most ubiquitous pieces of software around. That's nice. Not only does this keep my own devices clean and uncluttered from extra apps, but it means access to my notes isn't tied to a physical device. I could easily pick up someone else's iPad or use a computer that belongs to someone else to hop on the web and get access to my notes.

A third benefit to being web-based means that notes can easily be shared with others. First off, as stated above, there's no special client-side software needed. That means if I share a note with someone else there's no struggling to get them to install an app. They just *click* a URL and open the note. Next, MediaWiki has a built-in permissions system which allows notes to be made read-only, read-write, or hidden based on each user's permissions.

MediaWiki was also designed with collaborative editing in mind. There's a conflict resolution procedure in the event that two or more people edit a note at the same time and there's even a change history where you can see who made what change at what time. Notes can even be rolled back to prior revisions.

MediaWiki has a built-in categorization system and of course, being web-based, supports hyperlinks between different pages or between pages and categories. Adding a page to a category (or multiple) is as simple as typing some specific markup strings into the page.

I really like MediaWiki. I've used it for years both personally and in multiple different jobs. It's one of my favorite tools and one I use multiple times a week.

You can download it at www.mediawiki.org and there's a quick setup guide here at mediawiki.org.