My Tools for Studying

Anyway, I thought it would be neat to document the tools I'm using today. It'll be interesting to read this in a couple of years to see how things have changed again and maybe it'll give a fellow cert-chaser some ideas for today.

Last year I bought an iPad (Android vs iOS: Opinions From a Long-Time Android User ) and I now use it for very close to 100% of my reading. I've also found some great apps for taking notes and creating certain types of content (some of which are mentioned below).

One of the best accessories I've found for the iPad is the Logitech Ultrathin Keyboard Cover. This makes typing notes on the iPad the equivalent of sitting at my PC.

If I'm reading a whitepaper, a design document, or an electronic copy of a book, I try really hard to make sure it's in PDF format. One reason is because PDFs look great in GoodReader and the other is so I can do highlighting and markups of the file using the built-in tools in GoodReader.

I was never one of those students that would highlight my textbooks (what? you want me to WRITE in the textbook??!!) but I'm a highlighting FIEND in GoodReader. What I usually do is highlight important parts as I'm reading and then go back later on and transcribe my highlights into my study wiki (more on the wiki below). My ability to retain content goes way, way up if I first read it and then type it back out in my own words.

GoodReader has another feature that makes it the perfect reader for me: integration with Dropbox for downloading documents and syncing marked-up documents to a Dropbox folder.

Dropbox is pretty universal now; everyone has an account. I like Dropbox the most when I don't even know it's there. By that I mean when the app or tool that I'm using abstracts away Dropbox and just lets me save and open files from a "cloudy" folder, that's the best way to use Dropbox. GoodReader does this. Once linked with your Dropbox account, you can save and open files from your Dropbox folders in much the same way as saving and opening from the local file system. It's a seamless experience.

Since I want to be able to study any where, at any time, that means my study material has to be everywhere all the time. That's really the role Dropbox fills. I initially store all my PDFs in Dropbox which instantly makes them available to all my devices. Then on the iPad, where I do most of my reading and mark-ups, I use GoodReader's sync-to-Dropbox feature to push my marked-up files back into Dropbox.

As I said above, in order to really retain something I have to first read it and then write it back out in my own words. I actually realized this trait many years ago and so I setup a private wiki to act as my digital notebook/knowledge base. This was before the iPad existed and before the Software as a Service style applications really took off (such as Evernote). I ran this wiki on a web server that was accessible via the Internet so that I could access it from work and home. Today, I can access it from work, home, tablet, phone, etc.

The wiki replaced pen and paper as the tools for managing my study notes. I can jam notes, pictures, and hyperlinks to other sources very quickly into the wiki.

Two of the best features of having digital study notes:

The thing I like about wikis in particular as a digital notebook is the simple yet powerful markup language. The language is simple to use when you're writing out your notes but the resulting formatting is vibrant. For the little bit of extra effort of typing the markup, you get this perfectly formatted document when you go back to read what you wrote. I like that.

For the curious, my wiki software of choice is MediaWiki.

Normally when you're editing a wiki the only tool you need is a browser. And that's true on the iPad: you can use Safari just fine with MediaWiki; however it's a little bit more cumbersome than doing it on a computer.

Thankfully, a fellow MediaWiki user must've felt the same way because there is now a great app for editing MediaWiki wikis on the iPad called Wiki Edit.

I use this app not only for editing the wiki but for reading too because it has this great menu that you can use to jump to a specific section of the document, look at recent changes, upload photos, and get to your user page.

Last but not least is the tool I use for flashcards. This is the newest tool in my kit and one I've only used for the last few weeks. I've actually never studied with flashcards before. I guess because I found them a pain to create and worse, I always thought I would never have them with me when an opportune time came to do some studying.

Evernote Peek addresses both of these points pretty well. Peek pulls Hints and Answers from Evernote notebooks. Since I've already got Evernote everywhere, I can create flashcards on any device at any time. And conversely, since the flashcards all live in Evernote, I can pull them down and zip through them anywhere at any time. It's the best way to use flashcards. I'm rarely without my iPad so whether I've got 2 minutes or 30 minutes of free time, I just open Peek and run through some cards. It's awesome.

Now Evernote Peek is far from perfect (again, I'm not going to make a big list, just search the Evernote forums and you'll see what I'm talking about) however none of its shortcomings are show stoppers. The value of having flashcards sync with my existing Evernote account is really the killer feature and why I like Peek better than any other flashcard app out there.

Those are the tools in my study kit currently. The tools are great, but if you don't use them... 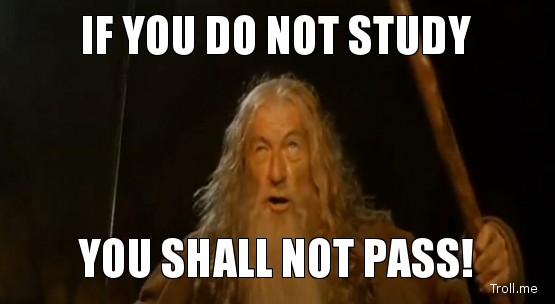